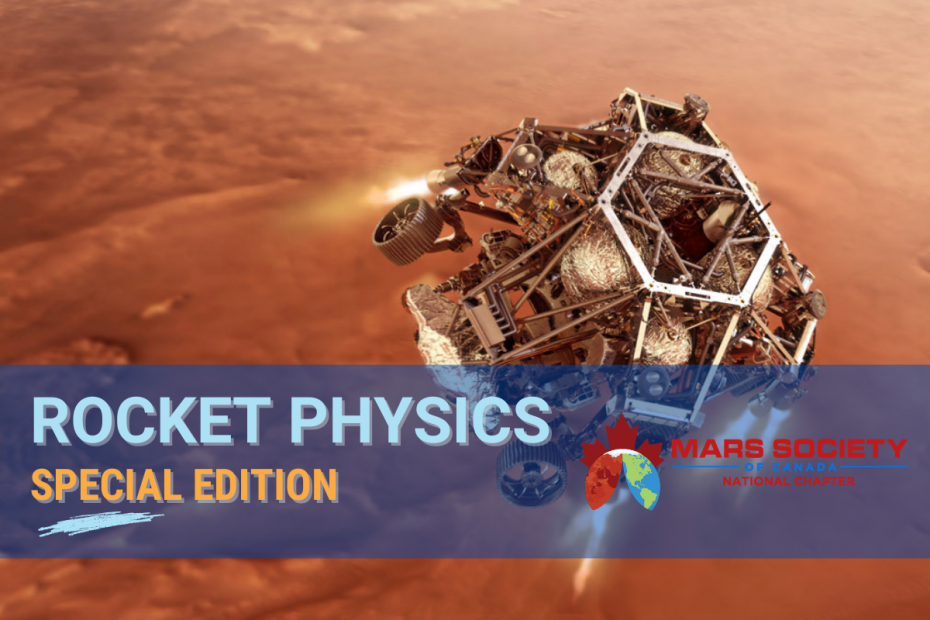 Perseverance, if all goes well, will land on Mars on Thursday!

Previous installments of Rocket Physics, the Hard Way have discussed the rocket equation and astrodynamics in the context of sending missions to Mars. Perseverance has completed most of its journey, but the most dangerous phase of its mission is yet to come – its perilous arrival at Mars. A one-ton rover the size of an SUV will hurtle towards the surface at thousands of kilometers per hour, and everything must go exactly as planned or the mission will end in disaster. It is no surprise that 60% of all missions to Mars have failed.

After launching from Cape Canaveral on July 30, 2020, an Atlas V booster flung Perseverance onto a transfer orbit to Mars. After just over 200 days in space, trailing behind the Emirati Hope and the Chinese Tianwen-1 missions, it is now fast approaching the Red Planet. Nine hours before landing, it will make its last trajectory correction maneuver (or TCM) to fine-tune its landing point.

Then, as it falls towards Mars, it will begin the final phase of its journey: Entry, Descent, and Landing (EDL). EDL is also known as the ‘seven minutes of terror’, and for good reason. Data transmission rates between Earth and Mars are extremely slow (slower than dial-up internet) and the distance means that radio signals take a long time to travel between planets. As a result, during EDL, mission controllers can do nothing but wait and hope that the automated systems are working correctly.

For an overview of the whole process, you can watch this NASA animation.

Now, let’s go through each stage, one by one, and learn some of the physics behind them.

For the last eight months, Perseverance has been kept alive by its ‘cruise stage’, a ring-shaped device equipped with avionics, thrusters, antennae, and solar panels. It has powered the onboard systems, performed TCMs, and maintained communication with Earth.

Ten minutes before entry, the cruise stage will be jettisoned to later burn up in the atmosphere. What remains is Perseverance, enclosed in its protective aeroshell. Throughout its journey, the spacecraft was kept at a gentle spin of 2 RPM to keep its alignment stable. Now, its attitude thrusters fire to stop the spin and to align the heatshield in the optimal entry orientation.

During cruise, the spacecraft had to be balanced so that it would spin properly. It did this using two 70-kg ballast weights known as Cruise Mass Balance Devices (CMBDs.) Now, these are jettisoned to shift the centre of mass away from the capsule’s axis, unbalancing it in preparation for entry. These weights will smash into Mars at thousands of kilometres per hour, sending tremors through the ground that will be picked up by the InSight lander, heralding the arrival of Perseverance.

Seven minutes before landing and at an altitude of 130 kilometres, Perseverance slams into the Martian atmosphere at nearly 20,000 kilometres per hour. Air can’t get out of the capsule’s way rapidly enough, so a shock forms that compresses the oncoming gas in front of it, heating it up to about 1,300 °C. The capsule is equipped with an ablative heat shield, which slowly vaporizes throughout entry. This carries away heat and protects the rover. This was inspired by how the outer layers of meteors burn away while entering the Earth’s atmosphere, keeping the insides cold.

The fireball surrounding the aeroshell causes the air to become ionized and electrically conductive, blocking radio signals. The blockage of radio signals, combined with the lightspeed delay between Earth and Mars, means that Perseverance will need to handle every step of EDL autonomously.

The angle at which the capsule moves through the atmosphere must be just right. Otherwise, it could deviate too far from its course and miss the landing site. Its entry angle could be too shallow, reducing deceleration, and causing it to ‘skip’ off back into space. It could enter too steeply and fall deep into the atmosphere at high speed, causing it to burn up or crash.

Perseverance will have some control over its path using a technique known as a lifting entry. The capsule will not enter with the blunt end directly facing the atmosphere – rather, it will do so at a slight angle. This diverts some of the oncoming air off to one side, generating a sideways lift force.

Using the attitude control thrusters to keep the capsule tilted, however, would cost too much fuel. Instead, the capsule was intentionally unbalanced (by jettisoning the CMBDs mentioned earlier) so that it would naturally tilt due to aerodynamic forces.

This technique was used as far back as the Apollo program to provide reentry control:

Accordingly, by simply rotating the capsule, Perseverance’s automatic guidance systems can change the angle of its tilt, thereby changing the direction of lift. This allows it to steer up if it’s coming in too steep, down if it’s too shallow, and left or right if it’s going off-course depending on where it deflects the air.

Meanwhile, back on Earth, we wait with bated breath to find out if the rover survived.

At three minutes to landing, six more balancing weights are jettisoned to return the capsule’s centre of mass to its centre axis. This causes it to fly straight again, rather than at an angle. This is known as the ‘straighten up and fly right’ maneuver, or SUFR.

Now, a different type of guidance is needed. Mission planners cannot (yet) achieve pinpoint landings – rather, the spacecraft can reasonably be expected to land somewhere within a region known as a landing ellipse. Essentially, the ellipse represents the uncertainty of the landing point.

It is crucial that the ellipse is free of hazards like slopes and boulders that could damage the rover on landing. So, to maximize flexibility and to minimize driving distances to points of scientific interest, mission planners try to get the ellipse as small as possible by maximizing the spacecraft’s navigational accuracy. Perseverance will demonstrate a suite of new technologies that allow it to have a 50% smaller landing ellipse than previous Mars missions.

The first new technology is a guidance algorithm called a range trigger. Previous Mars missions deployed their parachute the moment they were slow enough, to minimize the risk of hitting the surface too fast. Conversely, Perseverance intelligently calculates its range to the landing site to deploy the chute at just the right time. It does so using a type of sensor called an inertial measurement unit, or IMU. The IMU measures its deceleration, allowing the onboard guidance computer to predict where it is using integral calculus. Once the guidance computer predicts that it is the right distance from the landing site, the range trigger deploys the parachute.

IMUs are used in numerous everyday applications, such as in your smartphone, which uses one to detect its orientation. IMUs are also vital to aircraft and self-driving vehicles for navigation. All of these systems use a family of accuracy-improving algorithms that were originally developed for use in the Apollo missions, demonstrating the value of spin-off technologies to life on Earth. Learn more about spin-off technologies in the Scientific Discovery and Technological Innovation section of our Why Mars, What About Earth? page.

Four minutes after entry, at an altitude of 11 kilometres and a velocity of about 1,600 kilometres per hour, a small explosive charge blasts the parachute open.

The parachute is 21.5 metres in diameter and is designed to catch the thin Martian atmosphere at supersonic speed. Within twenty seconds, it slows the rover to under 550 kilometres per hour, and the heat shield is jettisoned. Perseverance tastes the frigid Martian air for the first time.

With the heat shield gone, Perseverance can now demonstrate a second new technology: terrain-based navigation. Since there is no GPS on Mars, this system instead uses data from a landing radar and a camera called the Landing Vision System (LVS) to determine its position. The landing radar allows the guidance computer to estimate the capsule’s altitude while the LVS begins snapping pictures of the oncoming terrain. It compares these pictures to pre-programmed maps of the area obtained from orbital imagery, achieving a more refined estimation of Perseverance’s location than the IMU alone can provide. These include hazard maps, in which machine learning algorithms have identified unsafe areas to avoid.

During the Apollo missions, all this was done manually by astronauts looking out the window; but now, computers are powerful enough to do it on their own. The guidance computer notes how far off-course the rover is, then plans how the retro-rockets will need to fire to maneuver Perseverance to a safe touchdown spot in the next phase: landing.

Despite the drag from its 21.5-metre parachute, Perseverance is still falling at 300 kilometres per hour – much too fast for a safe landing. One minute from touchdown, at an altitude of two kilometres, Perseverance jettisons its backshell, which is carried away by the parachute.

Now, the powered descent stage of the flight begins. The rover hangs under a skycrane equipped with eight retro-rockets, which fire to slow its descent further. This skycrane is similar to that used by Curiosity in 2012. These retro-rockets work by passing hydrazine fuel over a catalyst bed, which causes it to violently decompose into hot nitrogen and hydrogen gas.

For the final approach to the landing site, the skycrane tilts like a helicopter so that a portion of its retro-rocket thrust is directed sideways. It moves over to the safe landing site selected earlier by the Landing Vision System, then cancels out its horizontal velocity to descend straight down. It continues to descend and slow until it is just twenty metres above the ground, at which point half of the retro-rockets shut down. This reduces the thrust generated by the skycrane, allowing it to descend at a constant rate of three kilometres per hour.

At this point, the skycrane begins lowering Perseverance using three 7.5-metre nylon bridles and a communications umbilical. This ensures that the retro-rockets are kept far from the ground, reducing the chance that they will kick up rocks and dust that could damage the rover. Perseverance unlocks and deploys its wheels, bracing for landing.

The skycrane then brings the rover to a gentle touchdown. Explosive bolts will fire to cut away the bridles and communications umbilical, then the skycrane will fly away to crash-land at a safe distance.

If Perseverance has survived the fire and fury of EDL, it will deploy its instruments and radio home its success.

Perseverance’s surface mission will last 687 Earth days, or one Martian year. Like Curiosity, it is nuclear-powered, meaning that it is no longer dependent on the sun for energy. After all, it was a sun-obscuring dust storm that ultimately killed the Opportunity rover. This also broadens the selection of sites the Perseverance can reach to do science.

NASA has stated that it hopes to accomplish four primary objectives during this time (paraphrased from the Perseverance surface operations website):

Perserverance also carries with it the Ingenuity Mars helicopter, which will attempt the first powered aircraft flight in another planet’s atmosphere. It will act as a robotic scout and yield valuable data for the future aerial exploration of Mars.

Perseverance will not only continue the long heritage of rovers searching for past life on Mars, but also pave the way for future human explorers to follow. It may also collect the first core samples of Mars ever to be returned to Earth, which will open up boundless opportunities for greater understanding of the Red Planet.

However, it must first survive the seven minutes of terror.

For detailed technical information on Perseverance’s EDL guidance systems and algorithms, read the following paper, available from the Institute of Electrical and Electronics Engineers (IEEE):

1 thought on “Rocket Physics Special: The Physics of Perseverance”