ISRU Part I: How to Make Fuel, Oxygen, and Water on Mars 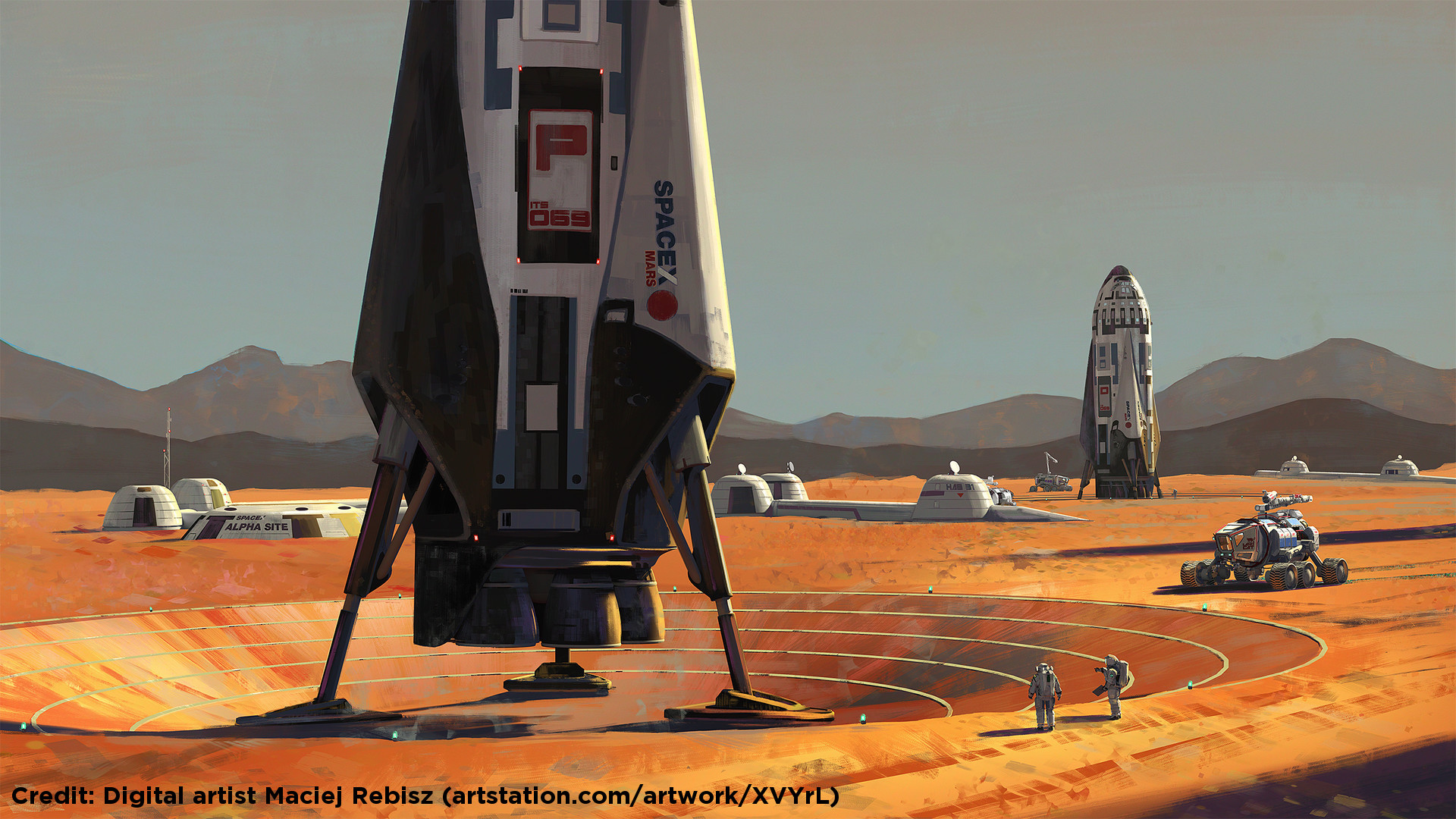 Of the plethora of acronyms in Mars exploration circles, one in particular forms the cornerstone of many Mars and Moon exploration plans: In-Situ Resource Utilization, or ISRU. It is key to establishing a permanent human presence beyond Earth, and both the SpaceX Starship and original Mars Direct plan rely on ISRU for success. But what exactly is it?

Simply put, instead of bringing everything you need with you, ISRU is the strategy of leveraging locally-available resources; ‘living off the land’. Rocket fuel, air, water, construction materials – these can all be made on Mars. All spacecraft designs are afflicted by the so-called ‘tyranny of the rocket equation’, which relates the amount of fuel needed for a spacecraft to perform its mission to its mass. Every extra kilogram of spacecraft or payload demands additional fuel to carry it to its destination, and the mass of the additional fuel demands further additional fuel! The rocket equation, first derived by Konstantin Tsiolkovsky in 1903, shows that increasing the mass of the spacecraft a small amount increases the fuel required by a large amount:

Consequently, leveraging Martian resources to manufacture essentials on-site makes the engineering and cost of a Mars mission much more manageable. It also means that since resupply and emergency return trips are impossible, ISRU provides backup in the event of a system failure. Since the greatest priorities on an expedition are having enough fuel to get home and having the resources to sustain life, we will begin by learning how to obtain rocket fuel, oxygen, and water on Mars.

Thankfully, none of the technology we need is cutting-edge. A process to manufacture fuel from the Martian atmosphere was demonstrated in 1993 by the Mars Society’s founder, Robert Zubrin, and the fundamental chemistry of the process dates back to 1897! Many of the essentials for life and work on Mars can be made using local materials with a little ingenuity.

On July 30, the Perseverance rover lifted off from Cape Canaveral to begin a seven-month voyage to Mars. Perseverance carries geological instruments, the Ingenuity Mars helicopter, and, most relevant to this context, MOXIE: the Mars Oxygen ISRU Experiment.

Then, through the application of heat and electricity, it will crack the carbon dioxide into carbon monoxide and oxygen:

Carbon monoxide burns with oxygen as a low-performance rocket fuel. Alternatively, this process could be used to produce breathing oxygen using nothing but the Martian atmosphere and energy. If MOXIE is successful, it would demonstrate a keystone technology for Mars exploration and settlement. However, due to the low performance of carbon monoxide and oxygen as rocket fuel, the SpaceX Starship and the Mars Direct plan are designed to use a different fuel mixture – methane and oxygen. This is slightly more complex to produce, but not by much. The spacecraft would bring a small supply of hydrogen, which would then be combined with atmospheric carbon dioxide to produce methane and water through the Sabatier reaction:

The water can be condensed from the reactor’s exhaust and electrolyzed to hydrogen and oxygen:

The hydrogen can be fed back into the Sabatier reactor to produce more methane, while the oxygen can be stored as oxidizer for the rocket fuel or be used for breathing.

A Starship would only bring enough fuel to reach the surface of Mars. Then, while the crew are performing the mission, it would use its hydrogen feedstock and the Martian atmosphere to produce the fuel required for the return journey. The stoichiometry of the reaction shows the enormous advantage that ISRU lends to this plan – because we use the Martian atmosphere, each kilogram of hydrogen we bring to Mars would allow us to produce twenty kilograms of fuel!

For later Mars missions and permanent settlement, the need to bring hydrogen with us to Mars is eliminated altogether if we find a reliable source of water or water ice. Then, we could obtain hydrogen by electrolyzing the water. Most of Mars’s water is locked up as ice in the Martian polar caps, in permafrost, in the regolith, and in small amounts as atmospheric water vapor. Astronauts could mine the ice and melt it down for their use, or they could strain it from the atmosphere.

While scientific consensus is that Mars lost a large amount of its water billions of years ago along with most of its atmosphere, a substantial amount remains as ice – over 5 million cubic kilometres of it! If all of it were melted, it would cover the planet to a depth of approximately 35 metres. However, this is only accounting for the ice. While the Martian atmosphere is so thin that any liquid water on the surface would boil away, scientists suspect that some exists underground in aquifers and groundwater. These underground oases would also be prime targets in the search for extraterrestrial life.

In 2018, scientists at the Italian Space Agency discovered evidence that a large body of liquid water exists under a Martian glacier, kept liquid at low temperatures by high concentrations of dissolved salts. Future missions may discover more subsurface liquid water, allowing astronauts to drill for it. Just as industrial activity is attracted by the discovery of oil on Earth, human settlers of Mars will probably settle close to Martian water to obtain drinking water, fuel, and oxygen.

For similar reasons, the discovery of water ice inside craters at the lunar south pole by NASA’s Lunar Reconnaissance Orbiter (LRO) and ISRO’s Chandrayaan-1 probe is exciting news! This means that future lunar explorers with Project Artemis would be able to make fuel and oxygen (and drinking water, of course) on the lunar surface. In the future, as part of deep-space exploration infrastructure, fuel could possibly be dropped from the Moon into low Earth orbit to refuel spacecraft.

Are you a space exploration advocate?Become a member today!

In summary, fuel and oxygen can be feasibly produced from the Martian atmosphere, and the MOXIE experiment aboard the Perseverance rover will soon validate this. Water can be found on Mars if one knows where to look, and can be used for drinking or for fuel and oxygen production. This makes human Mars expeditions significantly easier and safer.

However, ISRU is not limited to the production of fuel, oxygen, and water. Metals, plastics, bricks, concrete, and other useful materials can all be produced using Martian resources. With the testing and implementation of experiments such as MOXIE, we are witnessing a fundamental paradigm shift within space exploration. Space expeditions of old, from Mercury to Apollo, brought everything they needed with them. As we move into the future, expeditions are going to move farther and farther from the safety of the Earth for longer and longer periods of time, necessitating the utilization of local resources.

The holy grail is total self-sufficiency in space and on other planets, requiring little to no imports from Earth to survive. When that ultimate achievement comes, humanity will be a truly interplanetary species, and little will stand between us and the stars.

Keep your eyes open for part II of our ISRU series: ‘How to Make Construction Materials on Mars’

Help us produce more articles like this. We rely on our membership to fund our content generation and not-for-profit initiatives. Consider joining today, and be a part of the path to Mars!

3 thoughts on “ISRU Part I: How to Make Fuel, Oxygen, and Water on Mars”

Infographic – How did we find water in Martian subsurface lakes?

An Heirloom to a Civilization

ISRU Part II: How to Make Construction Materials on Mars