Rocket Physics, the Hard Way: The Tyranny of the Rocket Equation 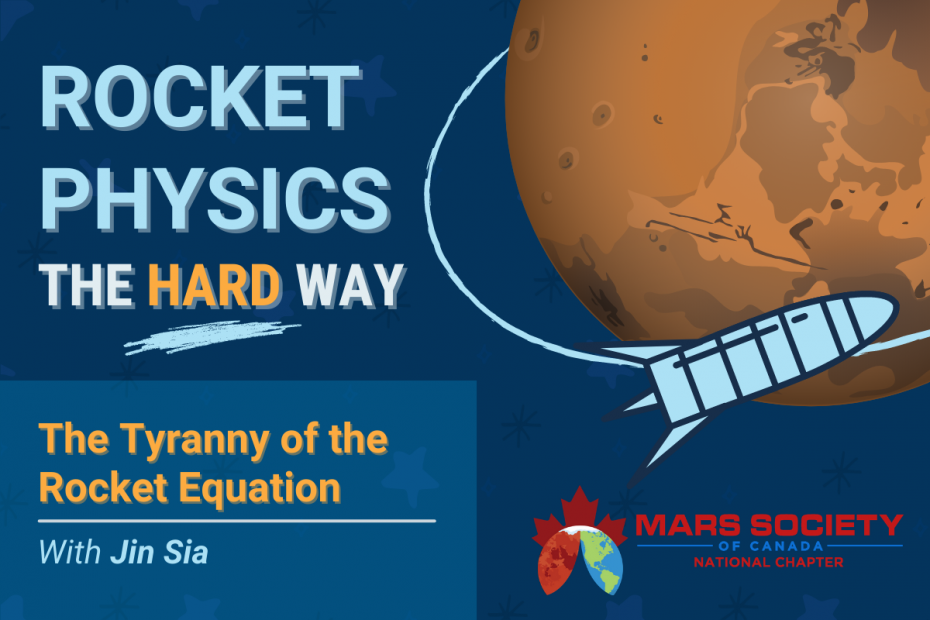 In this series, Rocket Physics, the Hard Way, we will learn the basic science and engineering behind rocket propulsion and interplanetary travel. Knowledge of high school physics, algebra, and basic calculus is useful, but not required. Mathematics will be kept to an absolute minimum, and more in-depth resources will be provided at the end for those who want to dig deeper. This will not be a rigorous technical series; rather, it will focus on demystifying the science and engineering needed to put things and people on Mars.

Before we begin, make sure you have a good grasp of Newton’s Laws of Motion. Here’s a refresher from TED-Ed if you need it:

Why Rockets are Hard

All propulsion systems – jet engines, rockets, automobiles, and even walking – rely on Newton’s Third Law: For every action, there is an equal and opposite reaction. If one pushes on an object, the object pushes back. A jet engine or a propeller pushes on the air around it to propel an aircraft forward, while our feet push off the ground. However, rockets are in a class of their own, because they must operate in the vacuum of space. With nothing in the environment to push against, they must bring their own mass to propel themselves.

Consider an extremely simple toy model of a rocket. It stores two units of fuel in its tanks, shown in red:

Then, it ejects one unit of fuel at a high speed (the exhaust velocity) causing the rocket and the remaining unit of fuel to gain a little velocity. If we wanted the rocket to go even faster, we could simply load on more fuel so that we have more to eject.

This means that the more fuel one carries, the less effective each unit is at providing the rocket with momentum – it’s a problem of diminishing returns. As a result, if more momentum needs to be imparted to the payload, the proportionate mass of fuel required increases exponentially.

Using integral calculus to model this problem of the rocket accelerating as its mass diminishes gives us the Rocket Equation. First derived by Russian rocket scientist Konstantin Tsiolkovsky in 1897, it is the most important governing equation for rocket design, because it determines the vehicle’s ability to perform a mission.

To further prepare us for an exploration of rocket physics, let’s introduce some important quantities and measures.

We measure the difficulty of each particular rocket maneuver using a quantity called delta-V. In science and engineering, the Greek letter Δ (delta) symbolizes change – delta-V is the amount of velocity change that a rocket’s engines need to supply to perform the maneuver.

Imagine a SpaceX Starship in low Earth orbit. As it orbits the Earth, it is travelling at approximately 7.8 km/s (about 28,000 km/h) relative to the planet. Unlike an aircraft, it does not need to keep its engines firing continuously to maintain this enormous velocity, because nothing is stopping it – there is no air resistance in space1.

However, to send it on a 250-day trajectory to Mars, we need to add about 3.7 km/s to its velocity. This is the trans-Mars injection maneuver. To do this, we fire the engines until the spacecraft has reached 11.5 km/s relative to the Earth.

Accordingly, we say that the delta-V of the trans-Mars injection maneuver is 3.7 km/s. However, 250 days is a long time to wait – this is the lowest-energy transfer we can use. We could get to Mars faster if we wanted to, but we would need to travel at a greater velocity. That means we would need more delta-V, which means that we would need more fuel – exponentially more fuel.

To determine if a spacecraft can perform a mission, we tally the delta-V of all the maneuvers it will need to perform and compare that with how much delta-V the spacecraft can supply. We can reduce the amount of delta-V – and hence, fuel – required with clever tricks such as:

After the engines shut down, the Starship is on its way to Mars. Unlike what bad science-fiction films may suggest, it will not need to fire its engines to keep moving due to the lack of air resistance, with the exception of small burns for course corrections. As a result, spacecraft usually2 spend the majority of their missions with the engines off.

Exhaust velocity depends on both the fuel used and the engine. Energetic fuels with a low molecular mass – like burning hydrogen and oxygen – will have better exhaust velocities. But engines can also be optimized to extract as much momentum as possible from the fuel through techniques like high combustion chamber pressures and large nozzles.

An alternative (and more commonly used) efficiency measure to exhaust velocity is specific impulse or Isp. It is measured in seconds, and is simply the amount of time that burning one kilogram of fuel can produce one kilogram of thrust – generally, higher is better. For example, the Space Shuttle Main engines had an Isp of 452 seconds in a vacuum. The SpaceX Merlin engines (used on the Falcon 9 family) have an Isp of 311 seconds in a vacuum. The reasons SpaceX’s engines have a lower performance despite using newer technology are complicated and will be covered in future installments.

The final important concept is that of mass ratio. This is how we quantify how much fuel a spacecraft needs. A spacecraft has a wet mass – its gross mass, full of fuel – and a dry mass – its empty mass, with dry tanks. The mass ratio is simply the ratio of wet mass to dry mass. The higher the mass ratio, the greater the fraction of the spacecraft’s wet mass is fuel.

Virgin Galactic’s SpaceShipOne has a mass ratio of about 3, which means it’s two-thirds fuel by mass at the beginning of the mission. Note that SpaceShipOne is merely a suborbital rocket – it follows a ballistic trajectory that briefly enters space before falling back to Earth, somewhat resembling an artillery shell’s flight.

On the other hand, the orbital spacecraft have much higher mass ratios. The Space Shuttle had a mass ratio of 16, making it almost 94% fuel by mass at launch. The mass of everything that wasn’t fuel: its structure, engines, avionics, life support systems, control systems – and oh yes, don’t forget the crew and the payload – had to fit within the remaining 6%. The only reason it could get away with such a high mass ratio at launch is because it leveraged staging.

By jettisoning its spent booster rockets during ascent (and afterwards, the spent external fuel tank), it didn’t have to drag as much dead weight all the way into orbit.

The Saturn V had even more demanding requirements – it had to deliver the Apollo spacecraft and lunar lander to the Moon. This gave it a monstrous mass ratio of 23, again possible only by staging. While nothing in the laws of physics limits a rocket’s mass ratio, having a much higher mass ratio than 20-30 pushes the limits of modern aerospace engineering, driving up costs for little additional payload capacity.

This is why rockets use exotic, exorbitantly expensive high-strength materials and have razor-thin margins for error. This is also why orbital rockets are enormous fuel tanks with a cluster of engines and a tiny payload or crew compartment attached. Everything needs to be as lightweight as possible to maximize the amount of payload that can be carried into orbit. In the case of the Saturn V, each extra kilogram of payload would demand an additional twenty-three kilograms of fuel for the mission.

This is the so-called Tyranny of the Rocket Equation.

Staging is one way to cheat it – all current orbital rockets resort to staging, even the planned Starship Super Heavy. Another cheat is to design engines that use atmospheric oxygen during ascent, reducing the mass of on-board oxidizer that needs to be carried. An example is the Skylon spaceplane, which is designed to reach orbit with a mass ratio of merely 6. Unfortunately, the Skylon and other air-breathing spacecraft like it are still in the early stages of development.

And finally, without further ado, here is the Rocket Equation itself, the second hardest part of rocket engineering (the hardest part being funding, of course):

While the meaning of the above equation may not be immediately clear, these are the important takeaways:

And that is why rocket science is hard. If you can remember only one thing about rocket physics, remember the Tyranny of the Rocket Equation.

In the installments to follow, we will use the concepts of delta-V, exhaust velocity, mass ratio, and the Rocket Equation to learn how to plan a mission to Mars. If you’re up to the challenge, stay tuned.

1 Actually, even in high orbit around the Earth, there is still some atmosphere, but it’s extremely thin. Air resistance is just so weak at such high altitudes that it only matters over long periods of time. The International Space Station’s orbit needs to be periodically boosted because of this tiny amount of air resistance. For details, read: Orbital Decay

2 Spacecraft spend the majority of their time with the engines off if they have high-thrust engines, which means they perform short, intense maneuvers. Spacecraft using weaker engines like ion engines have to fire their engines for a very long period of time (days, months, or even years) to get anywhere.

The derivation of the rocket equation: https://www.grc.nasa.gov/www/k-12/rocket/rktpow.html

2 thoughts on “Rocket Physics, the Hard Way: The Tyranny of the Rocket Equation”