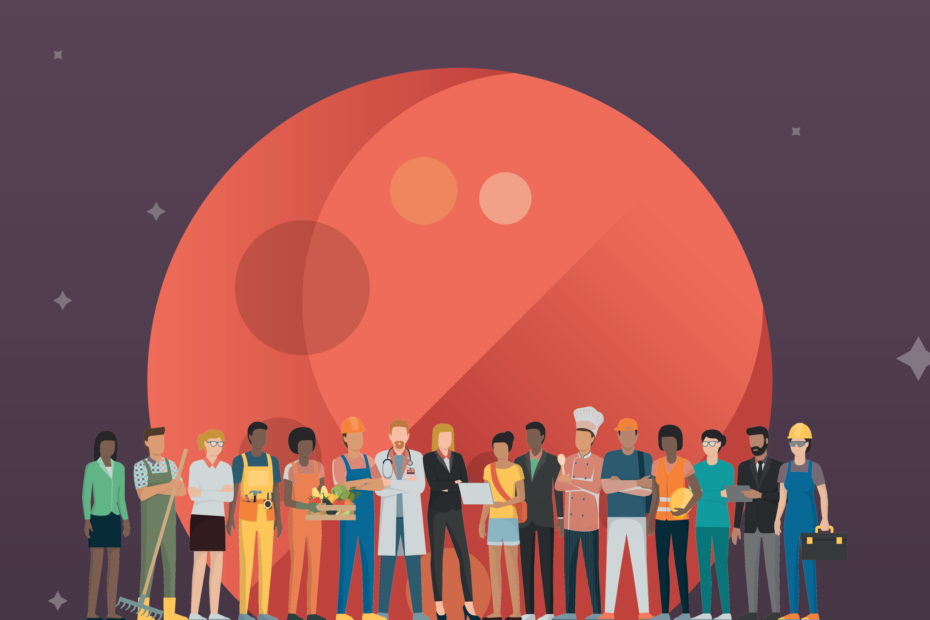 Your great-grandchild’s first job might be washing dishes in a restaurant on Mars. That may sound oddly mundane, and it should.

If you’re a consumer of space exploration news and conversation, then you will no doubt have come across the persistent meme that Mars settlement equals something like an escape hatch for the rich.

Though a first glance at the subject might elicit imagery of the wealthy fleeing from their responsibilities here on Earth and leaving us behind, this worn-out trope does not survive scrutiny.

With what infrastructure would these affluent few maintain their posh isolation? What quality of life could they possibly hope to achieve without a local community to sustain services and amenities? Are we to believe that these elite billionaires will have the capacity or inclination to repair their own power grid, be their own dentists or farm their own food?

The technological, infrastructural and supply chain requirements for living in any modern community are substantial. This will be especially true on Mars, where the implications of a power outage could be immediate and severe. Further, the rich would presumably want to enjoy their time on the red planet, rather than just survive. The associated comforts and delicacies would require an even more complex and robust support structure.

Even if this imagined plan were to rely on constant resupply ships, this would presuppose a high-functioning civilization back at home capable of generating and shipping supplies, in which case, what would they be escaping from? It would be vastly easier, safer and more comfortable to build their escape hatch in bunkers here on Earth.

No, the settlement of Mars will not unfold as the plotline to some cheesy Hollywood spectacle, where a few powerful villains cackle away the death throes of Earth in their luxury Martian lairs. Provocative though this narrative may be, it has no basis in reality.

You can’t establish a permanent human presence on Mars with a tiny subset of human civilization. The scope, scale and complexity of that mission will require the sustained efforts of thousands (and eventually millions) of people from all walks of life.

Just as civilization on Earth depends on the simple, hard (and often dangerous) work of everyday common people, so too will it be on Mars. The dream of a multi-planetary future will be actualized by the blood, sweat and tears of the average Martian, and the fruits of their labour will benefit not just the wealthy, and not only the red planet, but all humanity.

Consider for a moment the variety of professions essential to the function of even small communities here on Earth. In this regard, settlements on the red planet will be no different.

Our initial foothold there will be cautiously secured at the hands of a small number of astronaut-scientists, but as those outposts grow in size and security, others will soon follow.

As we get better at travelling between the two planets, spacecraft will rapidly improve in safety and reliability, and the cost per launch will continue to fall. In time, the only significant barrier to entry for an aspiring Martian will be their ability to pass a physical and psychological evaluation.

Not long after, the first Martian janitor will arrive. They won’t have a PhD in particle physics, a trust fund, or a dizzying portfolio of qualifications. Besides a relatively healthy body and mind, all that they will need to bring with them is a sense of optimism and a willingness to work.

Tradespeople will be in high demand as the volume of maintenance and construction projects increases. Electricians, plumbers, scientists and engineers will answer the challenge of a new and daring chapter in the history of our species.

As these communities grow, local governments will form. Administrators, clerks, lawyers and accountants will fulfill the resulting civil needs and help to facilitate new and experimental ways of organizing society. When day-to-day life on the red planet becomes stable enough, people will decide to stay permanently and start families. Mars will need daycare workers, coaches and teachers.

Martian entrepreneurs will open restaurants that serve clever variations of Earth favourites, modified to accommodate the selection of crops grown by local hydroponics farmers. Students will wash dishes in the back, in hopes of saving enough credits for a trip with friends to Olympus Mons.

Perhaps your great-grandchildren will be among them.

These familiar circumstances might not make for a compelling blockbuster script, or punchy news headlines. Perhaps this even sounds a little dull in contrast to the alarmist narrative of the rich escaping alone to Mars.

This is, however, a vastly more realistic and desirable vision for our multiplanetary future. The settlement of Mars is not an abandonment of our story thus far, but rather a broadening of the human journey to include both worlds.

On the red planet, people will have birthdays and funerals, do homework and go on first dates. Martians will have laundry days and forget to pay their water bills. They will love and be loved, have good and bad days, and enjoy and endure the full, ordinary beauty of human life.

At time of writing, Mars still feels like a strange, faraway place to many Earthlings. The notion that everyday people will one day live and work on the red planet remains too great a stretch for the imaginations of many, but not for long.

Most major transitions in human history are regarded with skepticism all the way up until the moment that they become reality. This has been the case with nearly every major discovery, innovation or shift in the fabric of our social and political landscapes, and it is largely still the case today when it comes to the popular understanding of Mars.

Just as human flight was once inconceivable because we do not have wings, and personal computers were initially regarded as impractical because they would never fit in a person’s house; it is currently imagined that the settlement of Mars will be only for the rich.

In time, this misconception will be just as laughable as its predecessors.

Until very recently, our species looked to the night sky as a place that nobody could visit in life. Today, we regard astronauts with reverence and envy, knowing how few of us share in that precious experience beyond our atmosphere. In the coming century, when settlement of the red planet begins (as it must), we will enter a chapter of human history where space travel becomes as commonplace as commercial flight.

As we push out into that frontier, the need for human talent, skill, and labour of every sort will follow close behind. For those that answer the challenge, their efforts will be rewarded by the pride and purpose inherent to the pursuit of such a worthy cause.

So, as you read this, know that whatever life path you find yourself on, and however your family pays the bills, there is a place for you and your children, and theirs in the exploration and settlement of Mars.

That immense and glorious adventure will call on us all.

2 thoughts on “Mars for All”