An Heirloom to a Civilization 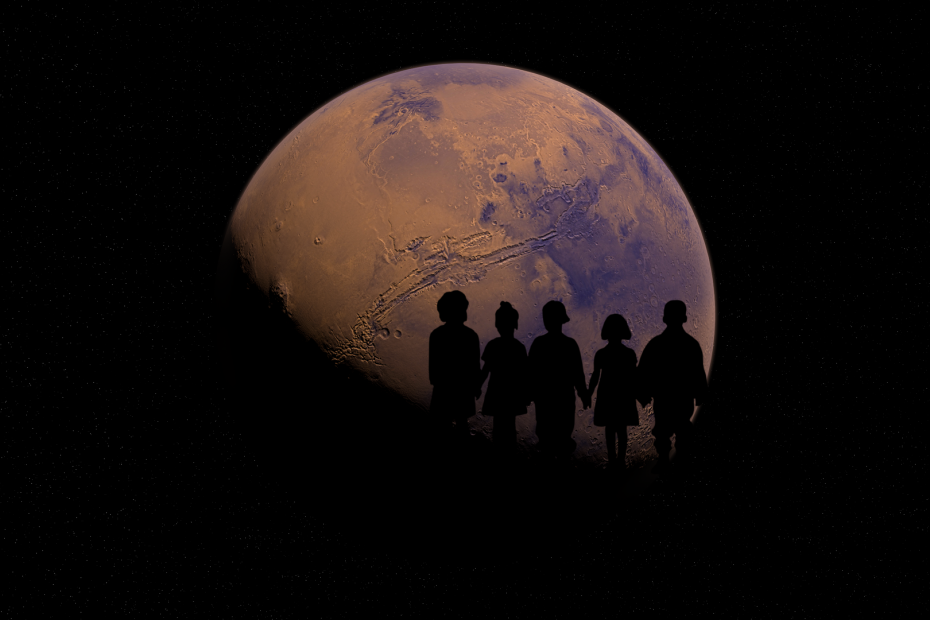 What will it mean to be human for our descendants?

Will children born in the coming centuries find a sense of pride as a member of our kind? Will their place in the ever reaching limbs of the Sapiens family tree provide them with a feeling of confidence in their capacity as beings, or will a shadow of doubt and shame linger over their humanity? There is a fundamental conflict occurring within our shared identity as a global tribe, and the outcome of that struggle will shape the minds of our progeny. If you pay attention to the public discussion on space exploration, then no doubt you’ve heard the troubling perspective:

“Human beings are a nothing but a blight here on Earth, why should we spread to new worlds?”

What an utterly dismal precedent to set. Has our identity as a species become so mired in the failures of our past and present that we can no longer see a future for ourselves that is not encumbered by them, or can we find a common vision with foundations of boldness and hope rather than humiliated self-reproach?

Admittedly, the nuance and complexity demanded of such a broad inquiry into the human psyche is overwhelming. The number of factors involved in determining the future outlook of humanity are legion, to be sure. There is, however, a relatively singular and tangible element to this equation that will have a crucial part to play. It comes down to a choice with implications of such magnitude that it might one day be regarded as the most important decision of human history.

Are we going to Mars?

Are we going to commit to a multi-planetary future for humanity now while the window is open, or will we shy away from what might be our one and only chance at the stars? Either way, we will be sending a profound message to future generations about our identity as a species.

Are human beings intrinsically destructive creatures that are neither prepared for nor deserving of the challenge of colonizing Mars, or do we have the potential to resolve our troubles, to outgrow our failings and to become a force for creation? It may sound trite, but those who say they can and those who say they can’t are both usually right.

We are flawed, profoundly. We have erred, grievously. But so too are we capable of wonders beyond our current imaginings. Our capacity to spread and create life in the coming millennia is vastly greater than the damage we’ve inflicted in the previous centuries. To begin the work of adopting a new world is the ultimate commitment to that aspect of our nature.

Hope on a Hard path

Partly because of rapid technological development, the difficulty of being human has deepened in recent decades. One need only observe the impact of mobile devices, AI, and social media – so recently introduced to our brittle social systems – to realize that the human condition is erupting into dimensions of unprecedented complexity. Especially for our youth, finding a meaningful and positive association with our humanity has become increasingly difficult.

Whether or not we take on the project of settling Mars, the coming generations will almost certainly be entangled in the navigation and resolution of a growing set of technological, social and environmental struggles. They will have their work cut out for them in addressing both the unresolved issues of their ancestors, and the compounding pitfalls of the surging digital age, but those labours need not define them, and they need not define us either.

Though the bulk of their time and energy will – by necessity – fall into the goliath project of minding and mending their homeworld, the establishment of Mars settlements can run as a parallel undertaking. They can labour away at the unfortunate legacy of tasks foisted upon them by the human story thus far, while simultaneously nursing the seeds of a bold and hopeful new chapter.

Our grandchildren and great-grandchildren (and theirs) are going to have quite a mess on their hands. Even if we make heroic headway on global issues in the coming decades, there’s nothing we can realistically do to circumvent the bitter reality that many troubles will remain. What we can do, however, (besides continuing to work harder and better on said global issues) is we can leave them something which is nearly entirely shorn of that ugly inheritance. We can craft an heirloom of hope in the form of a project of such boldness and audacity that it shines a light of daring optimism and hopefulness into their lives.

And what an heirloom it would be… to take the bounds of their world and stretch them out into the night sky.

The Significance of Scale

The difficulty of exploring and settling Mars is often presented as sufficient reason to forgo the effort. The gaps in our technology, the physical and psychological obstacles, the cost. The magnitude of these and other hurdles are waved about as though they diminish the efficacy of the endeavor, or push the viability of the project into some vague and distant future. In fact, it is precisely the magnitude of the project that imparts it with so much of its value.

By taking on an endeavor of such boldness, tenacity and ambition – despite the immensity – we would be demonstrating profound confidence in our potential as a species, and delivering a message of incalculable value to our descendants:

” Being human is not just about looking inward and solving old problems (important though that is), it is also about new beginnings. Our future potential vastly outweighs our previous failings, and though we need to toil in the quagmire of legacy, we must also engage in bold and wondrous new endeavors. We will fix our world, but so too will we spread to others.”

The difference between this mentality and one where we turn inward cannot be understated. To the minds of our descendants, that alternative message would be equally powerful:

“Mars is too hard, too far and too dangerous. We have too many problems here on Earth. Our foreseeable future is necessarily confined to the troubles that already lay before us. We are too inadequate or too flawed for the stars.”

Besides the simple truth that it is factually incorrect, the implications of the latter proposition for the identity of future humans are dire. This would be giving up on a cosmic scale, literally. On the contrary, the difficulty of going to Mars should not dissuade us. It will be incredibly difficult and dangerous. It will push us, and stretch us, and require our absolute best. That is exactly why we should go.

By making a commitment to the exploration and settlement of the red planet, we can open the door to a shared human identity that is underpinned by a fierce optimism for what we can be, rather than the burden of what we have been. But the consequences of becoming multi-planetary (or not) for future humans do not stop there, not by a long shot. A multi-planetary future could sustain a much larger, thriving human population than if we remained confined to the Earth.

I am of course smuggling in the assumption that our descendants will eventually solve many or all of the great problems before us, and that space exploration will aid them in doing so. There is good reason to be optimistic on both accounts.

Assuming that we can eventually become adept at traveling to and living on other worlds (which is almost certainly the case) the growth of our population will accelerate, spreading the light of consciousness without the hard constraints of living on a single planet. A choice to shy away from Mars could quite literally cost the lives of trillions of future humans. Should we decide that staying here on Earth is cheaper, safer, more deserving or otherwise prudent, we may be preemptively snuffing out the existence of immeasurably more humans than have ever lived to date.

Shackled by the physical constraints of our primal nest, the vast majority of all human creativity, ingenuity, passion, kindness and love will never come to be, not to mention the positive dimensions of our distant descendants that we can scarcely yet imagine. If this sounds arrogantly pro-human, pause to bear in mind that we will not be traveling alone. As we take root throughout our solar system and beyond, so too will the total number of plants, animals, insects, and all other forms of life bloom with us on new worlds. Rather than stretching ecosystems to the brink, we will create them. This is more than just an opportunity for humanity, it’s also a profound obligation to life itself.

Whatever transgressions we apes have made thus far, the scope and scale of goodness that we stand to create – should we choose the path of growth amongst the stars – is hard to fathom. As we have largely been the trespassers and usurpers of life on Earth, our descendants have every opportunity to be the nurturers and gardeners of life in the solar system, but only if we give them that chance.

When the first children are born on Mars, there will be a profound and fundamental shift in what it means to be human. When that time comes to pass, our descendants here on Earth will know that whatever our story has been thus far, what is to come is bright and boundless.

As for our descendants on Mars, their journey will have only just begun…

Did you enjoy this article?

Help us produce the next one! We rely on our membership to fund our content generation and not-for-profit initiatives. Consider joining today, and be a part of the path to Mars!

Infographic – How did we find water in Martian subsurface lakes?

ISRU Part II: How to Make Construction Materials on Mars

ISRU Part I: How to Make Fuel, Oxygen, and Water on Mars