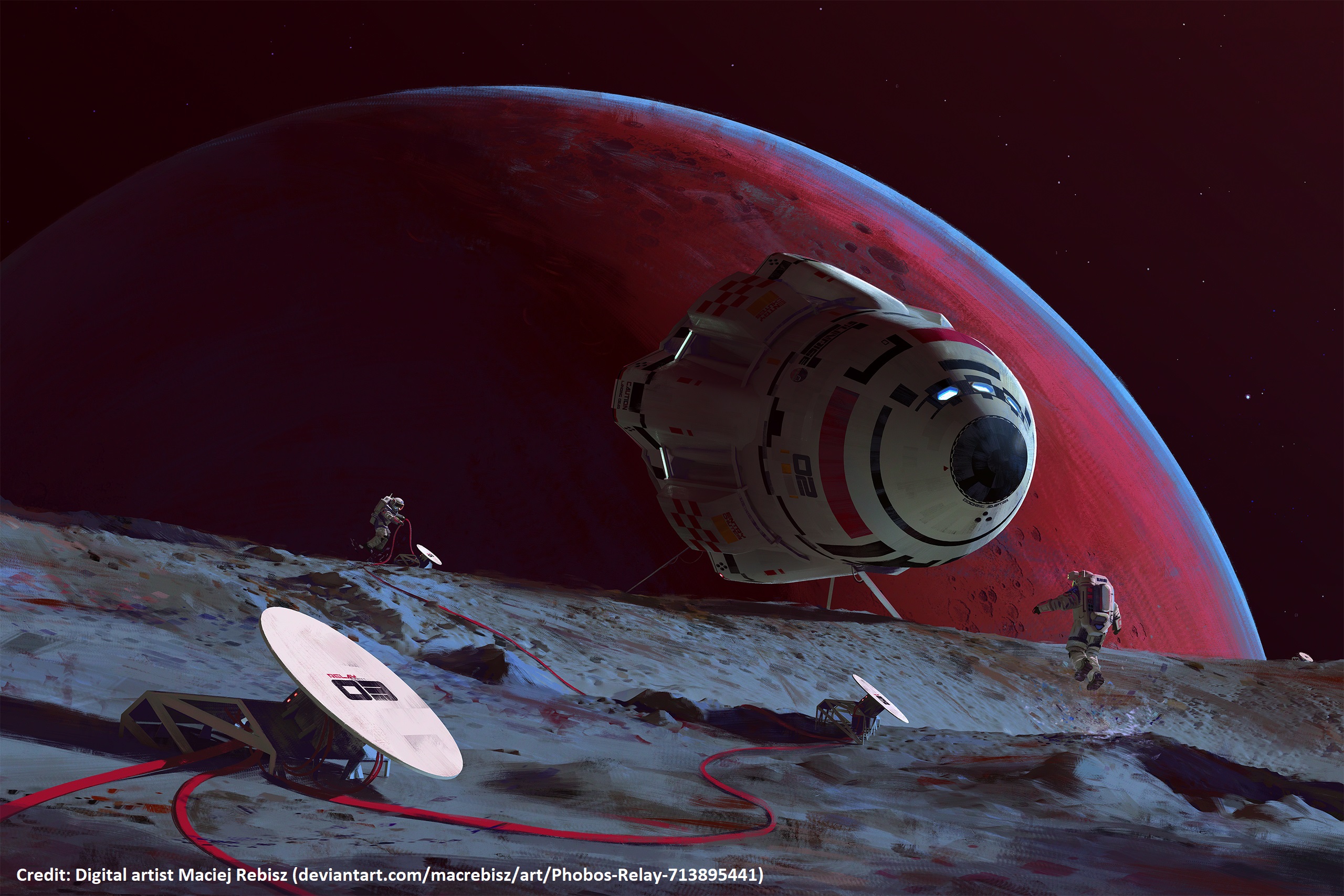 Access to energy is arguably the most important indicator of a civilization’s development. On Mars, having access to energy can mean the difference between life and death – not only is it necessary to power life support systems, but it is also used for ISRU and for any other conceivable activity. Some processes require mostly thermal energy, such as the smelting of iron ore or melting ice, however, most require electrical energy.

The Apollo spacecraft and the Space Shuttle were powered by fuel cells, which essentially run electrolysis in reverse: hydrogen and oxygen are combined to produce electricity. However, this is contingent on a supply of hydrogen and oxygen being available, limiting it to use for short-duration missions.

The first exploratory expeditions to Mars will probably use solar energy, nuclear energy, or a combination of the two.

Nuclear energy is ideal for the initial missions, as it provides a reliable, powerful, long-lasting source of energy. Furthermore, the waste heat from the reactor can be used to drive ISRU reactions. One example is the Kilopower system currently being developed by NASA’s Glenn Research Center to power human outposts on the Moon and Mars.

However, nuclear energy may not be a sustainable solution for the growth of permanent settlements on Mars. Fissionable materials such as thorium and uranium are difficult to obtain and refine even on Earth, let alone by a fledgling Mars colony. Furthermore, nuclear reactors are complex systems, and would require a substantial industrial base to fabricate barring a major breakthrough.

Solar energy is the next most promising alternative, as numerous solar-powered probes have been sent to Mars, however, it is not without problems:

Accordingly, any solar power system would need to be combined with substantial storage (i.e. batteries) and alternative power systems, even close to the equator, due to the threat of dust storms and the lack of power generation at night. Robots can go into hibernation during lean times, but humans cannot.

Ironically, there is one engineering problem that is made easier rather than harder by the presence of humans: dust accumulation on solar panels. The solution? A duster!

Like on most rocky planets, the silicon needed for solar panels and electronics is widely available on Mars as silica in the regolith – one would be hard-pressed to find any regolith or rock that does not contain silica. All three methods discussed in Part II for smelting metals would work: carbothermal reduction, hydrogen reduction, and molten regolith electrolysis. However, the devil is in the details – solar panel silicon needs to be extremely pure: 99.999999% pure. This does not account for the trace amounts of ‘dopants’ that must be added to the silicon to make it a semiconductor, such as boron. Solar panels will also have to be imported.

Geothermal energy is a poor choice for expeditions as it requires finding geothermal hotspots and drilling into them. However, it may be one of the best choices for sedentary colonies. Unlike Earth, Mars is tectonically and geologically dead – its smaller size and mass means that its core cooled much more rapidly than that of Earth. Mars has no protective magnetic field as a result, allowing most of its atmosphere and water to be stripped away by the solar wind.

However, the latest evidence suggests that while its tectonic plates no longer shift and its volcanoes no longer erupt, Mars is not completely inactive. Last year, the Mars InSight probe detected seismic tremors emanating from the Cerberus Fossae fault zone, which is thought to have opened up recently (on a geological timescale; about 10 million years). While the exact amount is still uncertain, there may still be a considerable amount of residual heat left over from Mars’s formation that could be tapped for power.

To generate geothermal power, a settlement would drill into the ground to access the deeper, hotter layers of rock. The depth required is significantly reduced if geothermal hotspots are found. Water can be pumped into the hot rock, then allowed to boil inside a turbine at the surface. The steam generated spins the turbine, which in turn rotates a generator, generating electricity. The steam can then be condensed and pumped down into the depths again.

Geothermal energy would likely work more efficiently on Mars than on Earth for three reasons. Firstly, its atmospheric pressure is much lower, meaning that much greater volumes of steam can be generated to drive the turbine. Secondly, Mars’s surface temperature is much lower, meaning that the water can be cooled to lower temperatures before being pumped back down, increasing efficiency (the reasons are rather complex, but it is due to the second law of thermodynamics). Thirdly, we do not need to use water at all! Liquid carbon dioxide can be used as a working fluid instead, and it is better suited to the temperature ranges found on Mars. An additional advantage of using carbon dioxide is that unlike water, it is literally as free as air.

Are you a space exploration advocate?Become a member today!

A final option is wind. However, with the Martian atmosphere being less than 2% as dense as that of Earth, large turbines will be necessary to generate any significant amount of power. Even the most violent dust storms, blowing at over 100 km/h, exert aerodynamic forces similar to those of a light breeze on Earth.

At the beginning of ‘The Martian‘, the crew’s Mars ascent vehicle nearly tips over due to an extreme dust storm. This is impossible because the atmosphere is simply too thin. Ironically, a Martian dust storm is portrayed much more realistically later in the book: Mark Watney only notices that he has been inside one for days because his solar panels are not generating as much energy as he expected.

However, unlike solar panels, wind turbines perform best in dust storms, and they work at night too. This means that wind could act as an alternate, complementary energy source for when solar energy is weak. One major advantage of wind energy is that it does not require exotic materials such as ultrapure silicon or enriched uranium, making on-site fabrication more feasible.

At the end of the day, maintaining a diverse portfolio of energy sources is key to ensuring that any civilization – not just a Mars settlement – is resilient. Nuclear, solar, geothermal, and wind energy will all likely see use on Mars, applied in various proportions depending on geographical location, available industrial base, and demand.

However, the need for adaptability and resilience extends not only to the technology, but to future Martians themselves. When energy availability is poor, everyone will need to cut their power consumption to a bare minimum so that the community can survive to times of (relative) plenty. This also means minimizing food, water, and oxygen usage, because acquiring and replenishing resources requires investment of energy. Something as mundane as taking a long shower can endanger the colony. Mars will be a difficult, dangerous place to live for early explorers and settlers, and Martians will have to be community-minded to survive and thrive.

Perhaps they can set an example for us.

Keep your eyes open for part 4. If you missed them, enjoy parts 1 and 2!

4 thoughts on “ISRU Part III: How to Generate Energy on Mars”

Rocket Physics, the Hard Way: How to go to Mars – Extra Credit

Rocket Physics, the Hard Way: How to Go to Mars

Rocket Physics, the Hard Way: The Tyranny of the Rocket Equation

Countdown to a New Year in Space

Canadian Astronaut: NASA’s SpaceX Crew-1 Mission is “the dawn of a new era”