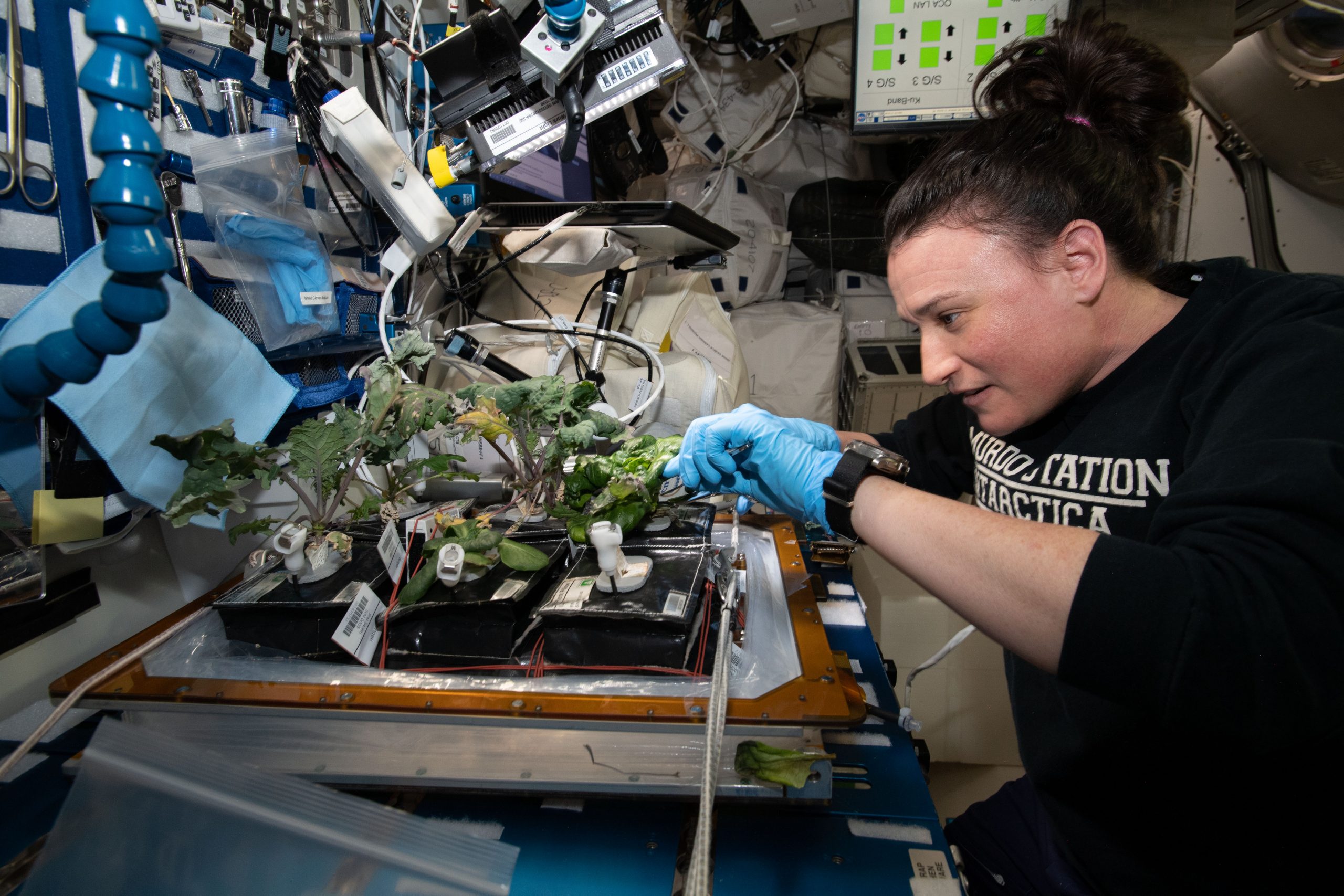 Unlike Earth, there are no ecosystems to exploit on Mars. Having an ecosystem on hand would help turn carbon dioxide back into oxygen, produce fresh food, process waste, purify water, and provide numerous other services that us Earth-born take for granted. Additionally, having greenery and fresh food available would significantly improve morale. Starting and maintaining a sustainable ecosystem on Mars would probably be the most important, but also the most difficult long-term task for colonists.

Building a colony’s ecosystem will likely begin with growing food, as food production cannot be fulfilled by machines (yet). Having fresh, locally-grown food available is key to colonization efforts as it reduces the need for imports from Earth. The basis of all food production is plants, because they convert inert substances into living tissue by photosynthesis:

The plant then transforms glucose into the compounds it needs, such as cellulose, which forms the bulk of a plant’s structure. Plants are then eaten by animals (such as humans) for energy and micronutrients. As a result, plants provide food and oxygen while cleaning the air.

However, carbon dioxide, water, and sunlight are not sufficient; plants also require a plethora of other nutrients to grow, which they acquire from the soil. Chief among these are nutrients containing nitrogen, phosphorus, and potassium (so-called NPK, after their chemical symbols).

Despite the fact that the Martian atmosphere is mostly carbon dioxide, it is still too thin, too cold, and too dry for plants to live in (barring monumental advances in genetic engineering). Farming will need to be done in pressurized, heated, moist environments, such as greenhouses.

While sunlight is only 43% as strong at Mars’s orbit as it is at Earth’s, it is still sufficient for photosynthesis. This sunlight could be supplemented by artificial lighting, and productivity would be further enhanced by using carbon dioxide-enriched atmospheres in the greenhouses. Mars also has a close to 24-hour day, and its atmosphere provides some shielding from solar flares. In contrast, the Moon has nights two weeks long and has no protective atmosphere, making it a much more challenging environment for crop growth.

Since labour will be in extremely short supply in the first Martian colonies, extraterrestrial farming will likely spawn a wave of innovations related to automation and extreme environments. These innovations could benefit food-insecure communities on Earth, especially those living in polar latitudes (something that Glenn Scott, president of the Mars Society of Canada, is working on).

Farming small animals and edible fungi on Mars would complement an otherwise plant-filled diet. Aside from providing eggs, meat, and natural fertilizer, chickens would provide endless entertainment by flying to great heights in the low gravity. On the other hand, fungi do not require sunlight and decompose organic matter into useful nutrients.

The oldest method of agriculture is growing plants in soil. However, Mars does not have soil – only regolith.

Soil is defined by the presence of organic matter such as fungi, bacteria, and organic residues – these give soil its dark color. Hence, why Mars has no soil. A single gram of soil contains a phenomenally complex ecosystem with billions of microorganisms. These organisms perform numerous functions, such as enriching the soil with nutrients, fighting diseases, and breaking down toxins. Ultimately, they keep the soil fertile and productive. Colonists will need to turn regolith into soil to grow food in it.

Firstly, Martian regolith contains high concentrations of toxic salts known as perchlorates. Fortunately, methods exist for removing them. They are highly soluble in water, meaning that they can be removed by washing the soil. Alternatively, some bacteria eat perchlorates and excrete chlorides, which are more benign – this method is used for treating perchlorate-laden water on Earth.

Furthermore, in addition to containing the right nutrients, the soil must have the right physical and chemical properties. It cannot be too salty. It must have the right pH. It must retain water strongly enough to support life, but not so much so that it cannot drain. It must be porous enough to exchange gases with the greenhouse’s atmosphere. The specifics of controlling these properties delve deep into soil science and are beyond the scope of this article.

Finally, the soil needs to contain microbes, small organisms, and organic matter to feed them. Nitrogen-fixing bacteria are of particular importance; they take nitrogen in the air and convert it to a form that can be used by plants. In The Martian, Mark Watney makes soil by mixing Martian regolith with human feces, although he neglects to remove the perchlorates. After removing the perchlorates, colonists can make fertile soil by adding compost, treated sewage, small organisms like earthworms (or Marsworms?), and synthetic fertilizers.

Clearly, manufacturing and maintaining good soil is difficult. Arable land on Earth was made by natural processes over hundreds or thousands of years, and it can be rapidly destroyed by mismanagement. However, there are techniques that remove soil from the equation.

In light of the complexity of soil, Mars colonists may instead opt to use higher-tech soil-free methods, such as hydroponics and aeroponics. Instead of plants’ roots absorbing nutrients from the soil, the roots are immersed in nutrient-laden water (hydroponics) or in a mist of nutrient-rich water (aeroponics). The nutrient levels in the water, rather than being managed by soil bacteria, are managed electronically. These techniques have been used to grow a wide variety of plants on Earth, such as tomatoes, lettuce, potatoes, and cucumbers.

Plants grown using soil-free methods can be grown at a higher density, which is crucial for a Mars settlement with limited available volume. This is because hydroponics and aeroponics systems are easier to orient vertically than ones filled with soil, increasing the number of plants that can be fit into a given area. Furthermore, evaporation losses are reduced, reducing the load on the settlement’s air dehumidifiers. On Earth, this means that using soil-free methods translates to reduced land use (a major contributor to climate change and ecosystem destruction) and reduced water usage. Agricultural innovations developed for use on Mars could be easily repurposed to improve agricultural sustainability and food security on Earth.

Farm productivity could be further improved through aquaponics, or the integration of aquatic animals into the system. For example, tilapia fish and prawns could be grown in the irrigation water. This is an ancient technique, used in Asian rice paddies – an added benefit is that the fish eat anaerobic bacteria in the water, massively reducing the paddies’ greenhouse gas emissions. Their waste introduces useful nutrients, further reducing the requirement for synthetic nutrient production. Seafood would also add immensely to the healthiness and tastiness of a Martian diet (think Martian sushi). Incrementally increasing the sophistication of a colony’s ecosystem can improve its community’s resilience and health.

The Greening of Mars

The ultimate goal is to create a fully-closed, self-sustaining ecosystem on Mars that provides all the ecosystem services required by humans. Unlike technological systems, ecosystems have a capacity for self-repair and self-regulation. The first major attempt to create a completely self-contained ecosystem to sustain human life was the Biosphere 2 project (Biosphere 1 being the Earth) in Arizona, which was completed in 1991. It was intended to study the design of closed biospheres for space colonization.

The most serious problem of all was that of oxygen. The soil bacteria metabolized the organic matter in the soil and respired copious amounts of carbon dioxide, which was absorbed into the concrete structure before it could be photosynthesized back into oxygen by the plants. As a result, the oxygen concentration in the air fell to dangerously low levels over several months, forcing the managers to pump external oxygen into the facility.

Nevertheless, despite the apparent ‘failure’ of the experiment due to the need to inject oxygen, Biosphere 2 has taught us valuable lessons about closed ecosystems. The crew stayed in good health on a low-calorie, nutrient-rich diet, without external food resupply. They achieved exceptional productivity on the agricultural land within the facility. The ecosystem not only recycled their air and provided their food, it also cleaned their water. Ultimately, the experiment showed that creating and maintaining an artificial biosphere is within the realm of possibility, although we still have much to learn.

Future Mars colonies may begin by only producing their food through biological means, then gradually transitioning their life support systems to biological ones as well. The lessons learned by necessity from building and using their ecosystem effectively would go a long way to teaching Earth-bound civilization to live sustainably. Both old and new knowledge will be useful in this endeavor. But ultimately, by learning to build life-sustaining ecosystems in space, we gain the ability to live away from our planet of birth, indefinitely.

My father sometimes reminisces about catching fish on rice paddies as a child growing up in his home village, in Malaysia. My generation’s children will be Martians. Perhaps they will grow up with fond childhood memories of catching fish on colonial aquaponic farms, as a vanguard of chlorophyll green creeps across the deserts of Mars.

Did you enjoy this article?

Help us produce the next one! We rely on our membership to fund our content generation and not-for-profit initiatives. Consider joining today, and be a part of the path to Mars!

4 thoughts on “ISRU Part IV: How to Grow Food on Mars”